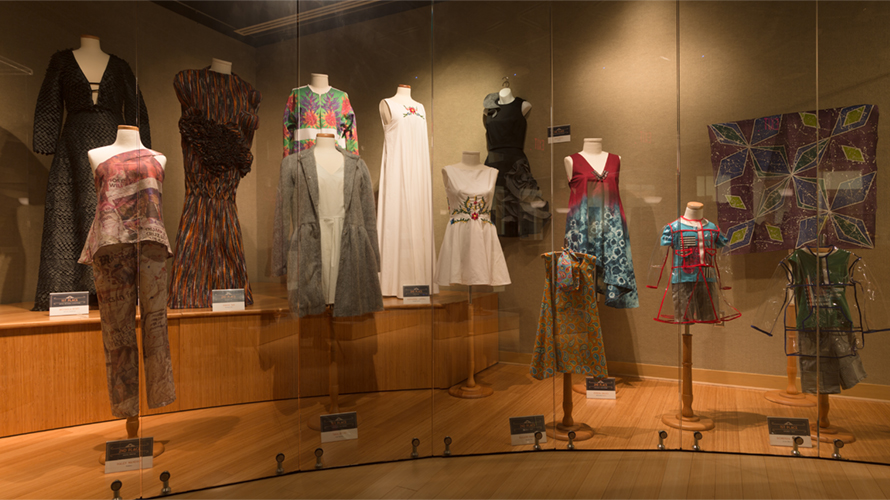 The winning garments, accessories, and artworks from the annual Iowa State University Fashion Show showcase the finest creative work produced by undergraduate and graduate students at Iowa State University. Four nationally-recognized judges in the field of textiles and clothing juried all designs submitted for inclusion. They evaluated the garments on the creative and technical aspects of each piece. The 34th annual Fashion Show included the work of 45 designers, 56 models, and 4 student producers, 35 directors, and 100 committee members. 95 entries were modeled on the runway and an additional 33 projects were displayed in the mounted exhibit.

Over 2,000 tickets for The Fashion Show 2016 were sold and $15,600 in awards were announced throughout the course of the evening.

The first and second place winners in each design category are included in the 2016 Winning Garments Exhibit. The Fashion Show is one of Iowa State University’s most successful student-produced events. The show was originally staged on the steps of MacKay Auditorium, in MacKay Hall, and in Curtiss Hall. In 1989, the catwalk used for the show grew from five to twenty feet long. As the show continued to grow in audience and designer participation, a change in venue was needed. The Fashion Show moved to Fisher Theater in 2000 and most recently, to Stephens Auditorium in 2005. Since 2007, student winners of the annual Fashion Show have been displayed in the Mary Alice Gallery, 1015 Morrill Hall, during the summer months.