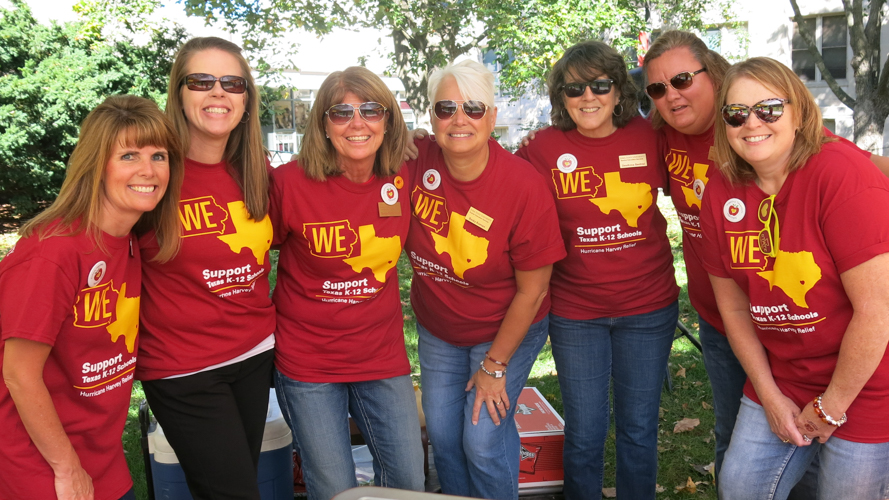 When Hurricane Harvey hit the Houston metropolitan area last fall inflicting $190 billion in damage, the staff and students of Iowa State University’s Teacher Education Services knew they had to help.

Iowa State has had a close working relationship with the Aldine Independent School District in Houston for 27 years.

Each semester, a group of five to 10 future teachers from Iowa State — in majors ranging from kinesiology to family and consumer sciences education and studies — choose to gain classroom experience at Aldine. Five of them were student teaching there when the hurricane hit.

“We wanted to do something to help our partners there, but we also knew we had students there, as well,” said Daryl Sackmann, a coordinator of clinical experiences in the School of Education.

First experience with a hurricane

The Category 4 hurricane left 972 students in the Aldine school district homeless and displaced another 920 students. A total of 3,700 students and 861 staff members were impacted by flood waters. Some lost their homes, while others lost cars and furniture and missed time at work.

Two Iowa State student teachers — Rachel Conn and Jenna Wilkinson, both students majoring in world languages and cultures — were among those displaced from their homes. They were flooded out of their apartment in downtown Houston.

“They were able to move up to a second-floor apartment with friendly neighbors until the water receded enough for me to get to the girls and get them out of the area,” said Scott Corrick, a 1995 Iowa State alumnus in elementary education who’s spent the last 23 years at Aldine. He’s now director of human resources at Aldine Senior High School.

“I had contacted a friend who lived in the area who was able to go and get the girls and relocate them to his home,” Corrick said. “Once the roads were clear, I went down and met the student teachers to help get their belongings and furniture out of the flooded apartment and into storage. Rachel and Jenna moved in with a friend of mine downtown, as he had plenty of room. He gave them rent-free living for their 16-week student teaching placement.”

Corrick said the Aldine school district called and texted the student teachers every day, and sent updates about them back to Iowa State. Sackmann praised the generosity of the Aldine district in helping those students, who in December graduated from Iowa State.

“They’ve never been involved in a hurricane,” Sackmann said. “The Aldine school district really took care of our Iowa State students. They checked in with them. They supported them through the course of the rest of the semester, rent-free.”

Meanwhile in Ames, the Iowa State teacher education staff and students sprang into action. They ordered 15,000 chocolate bars — 250 cases of World’s Finest Chocolate — and sold about 180 “We support Aldine” T-shirts especially designed for the fundraising effort.

They partnered with others in the School of Education, Iowa State University Education Association (ISUEA), the ISU Family and Consumer Sciences Education and Studies Club; ISU Family, Career and Community Leaders of America (FCCLA), and ISU Leaders in Education and Diversity (ILEAD). Then, they began to sell chocolate.

“We felt we could sell them,” Sackmann said. “For $1, we knew that even college students can afford it. We sold them on campus, at tailgating, at the homecoming day parade. Students took boxes home, went to area businesses. My family went across our neighborhood and to Sam’s Club.”

Ultimately, Iowa State managed to raise $6,000 to help Aldine employees and students affected by the hurricane. The money was provided to Aldine before the holidays. A ceremonial check will be presented at 11 a.m. Thursday, Jan. 18 in 0143 MacKay Hall.

“ISU worked very hard and put in a lot of time to help support our district,” Corrick said. “We are so grateful for the ISU School of Education and its efforts to support us. The money raised went to help support 12 staff families and six student families. Each of the 12 families received a $400 check, and the six student families got $200 gift cards to places like Target, Walmart, etc. The money went to pay bills, groceries, building materials, repair costs, etc.”

The decades-long relationship between Iowa State and Aldine continues.

A group of Iowa State undergraduates travel to Aldine each spring for a weeklong practicum experience. This year’s experience will take 32 college students there between May 6 and 12 to teach at both the elementary and secondary level.

“It’s a chance for our students to experience something different,” Sackmann said. “Aldine has something that we cannot offer here in the state of Iowa.”

About 73 percent of the Aldine school district’s 69,000 students are Hispanic, while 23 percent are African-American. All students receive free or reduced lunch. Seventy-five percent are considered at risk. The diversity provides future teachers from Iowa State greater exposure to student needs such as English as a second language (ESL), and supplemental educational services (SES).

Aldine will be represented this week at Iowa State’s open house for teacher education students wanting to student teach outside central Iowa and in other parts of the world. The open house will be held from 10 a.m. to 2 p.m. Wednesday in the LeBaron Hall conference room. Corrick will attend, in an effort to welcome even more Iowa State students to Aldine.

“I always tell students to take advantage of the opportunities presented to you from your university,” Corrick said. “Coming to Aldine for a practicum or student teaching is a great opportunity and something different for you to experience. Students get to see urban education, teach in a very diverse environment, work with a diverse staff, and best of all, Houston is a great place to live and work.”

Some Iowa State students who student teach in Aldine choose to stay and work there after graduation. At least 32 Iowa State alumni currently work in the Aldine Independent School District. Corrick estimates that over the past 27 years, about 60 Iowa State alumni have worked as professional staff members there.

“We partner with several universities from the Midwest because of the outstanding preparation programs,” Corrick said. “It’s no secret that Iowa State not only produces outstanding teachers, they produce teachers who are well-prepared and ready to take on a challenge. That is why they are so successful teaching in Aldine.”

Iowa State University has had a close working relationship with the Aldine Independent School District in Houston for 27 years. So when Hurricane Harvey hit the Houston metropolitan area last fall, the staff and students in Teacher Education Services knew they had to help.

“ISU worked very hard and put in a lot of time to help support our district. We are so grateful for the ISU School of Education and its efforts to support us.”