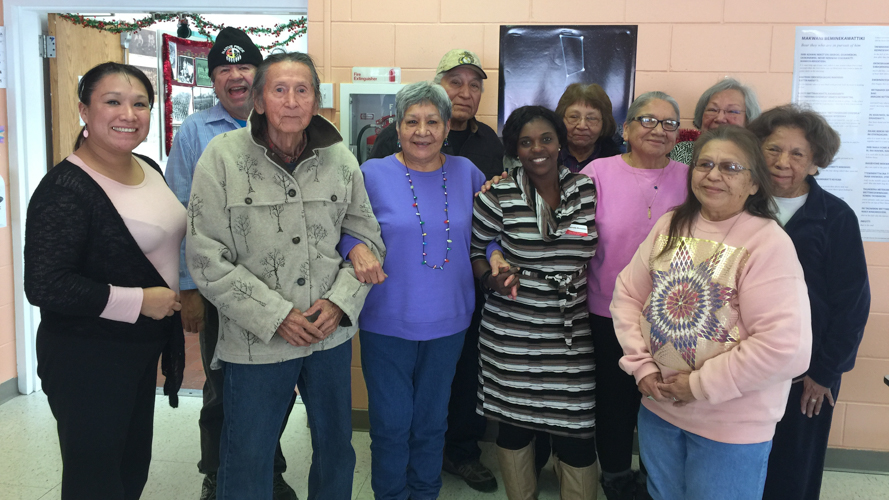 With care and attention given to learning the culture, building relationships, and developing trust, Iowa State University has over the past year begun to offer research-based financial education classes to residents of the Meskwaki Nation in Tama.

“The Meskwaki community is one that we have been trying to reach for several years,” said Suzanne Bartholomae, an assistant professor in human development and family studies and state specialist in family finance with Human Sciences Extension and Outreach. “A key to our success with the Meskwaki Nation is to build a relationship with community leaders and members that establishes trust and respect. Because there are unique needs and cultural practices, we have worked with the tribal council to make adjustments to our educational materials.”

The Meskwaki Nation, also known as the Sac and Fox Tribe of the Mississippi in Iowa, is the only federally recognized Native American tribe in Iowa. The tribe enrolls about 1,300 members, including about 800 who live on the 8,000-acre settlement in Tama County. Non-tribal members, including spouses, also live there.

The community is home to rich Native American culture, traditions, and values — including a deep respect and care for elders, and persistence in overcoming barriers. The tribe has its own regalia, arts, and crafts. Many elders still speak the Meskwaki language and are working to teach the language to the very young through an immersion program.

Jeannette Mukayisire, a human sciences specialist in family finance with ISU Extension and Outreach who works with 12 counties in northeast Iowa, is building a new relationship between Iowa State and the Meskwaki.

She started by contacting a former colleague who had worked at the Meskwaki Nation. She attended monthly birthday parties, to familiarize herself and get to know some of the residents there. After identifying some of the tribe’s needs, she began running possible financial education programming past the tribal council to make sure the material is culturally appropriate and aligns with the tribe’s values. The co-creation follows best practices for effectiveness in community development and education.

“I don’t want to do something that would be offensive to the community,” said Mukayisire, who’s originally from Rwanda. “I learned about the inside — cultural perception, what the outside people think of the community, and how that’s worked. We don’t want to be destructive. We want to mesh with their programming.”

Linda Tyon, 73, a retired teacher who lived and worked in five states before returning in 1990 to the Meskwaki Nation in Tama, attended one of Mukayisire’s classes. She said she trusted the knowledge and information provided.

“For some reason, she understood things,” Tyon said of Mukayisire. “She wasn’t close-minded about anything. She didn’t come with any stereotypes of who Native Americans are or who the Meskwaki are. Maybe because she’s from another country, she was able to relate to differences of people.”

Working with youth, adults, and seniors

Mukayisire’s initial efforts have been well-received.

Last spring, she led 11 people in the Finances of Caregiving class, a series of 2-hour workshops over five weeks that provides participants with a binder of research-based information including planning for retirement, and the cost of long-term care. The workshop is expected to be offered again in spring 2018.

“There’s no skilled nursing care in the Meskwaki Nation, so people go outside of the community. They don’t like that, but they have no choice,” Mukayisire said. “The settlement still pays for them when they’re in a nursing home outside. During the class, when they saw the numbers — they don’t know if the tribal council can keep paying for this cost.”

Mukayisire learned that death and dying are usually not talked about in the Meskwaki Nation. The caregiving class explores how to plan for when someone passes away. Participants gain helpful tools about gathering legal documents and planning ahead.

“This partnership helped me offer a class that I couldn’t provide,” Blackcloud said. “Partnering with ISU Extension and Outreach and having the opportunity to offer the Finances of Caregiving class and strengthen our elders’ minds aligns with the value of respect. A person who is taught respect can contribute to any society.”

Tyon, a mother of three and grandmother of 12, was among those attending the Finances of Caregiving class. She lost her 93-year-old mother three years ago. She said the class provides the kind of information people should record about bank accounts, safety deposit boxes, powers of attorney, and wills. It also helps people to organize their papers, credits, and bills, so surviving family members can take care of business in a timely and orderly way.

“I felt like I needed to get organized. Jeannette gave us a notebook. That paperwork in there was really helpful,” Tyon said. “One of the things it prompted me to do is a will. I never thought about it before. Legally, it might be a good thing to have. I recommend everyone have a will.”

The class is uniquely tailored to Meskwaki children, who receive a lump-sum of several thousand dollars from their tribe when they turn 18.

In addition, Mukayisire offers a Your Money, Your Future workshop to help Meskwaki residents live within their means and meet their financial goals. The two 90-minute workshops teach about developing spending plans, accessing credit history, selecting a financial institution, and understanding how credit cards work.

“We do have an activity called little things add up,” she said. “Like cafe latte, when you buy coffee every day, you realize how much that costs. For one woman, it was about gambling. She was spending $40 twice a week. In the end, she realized she spent $3,840 a year — enough to pay her annual car payment. It was a wake-up call.”

Iowa State aims to continue to build trust and develop a stronger partnership with the Meskwaki Nation as part of the university’s land-grant mission to share its knowledge with the citizens of Iowa through teaching, research, extension, and outreach.

Mukayisire continues to learn about Meskwaki customs, including the differences in rights between men and women. She receives resources and help in identifying programming tailored for Native Americans from those on the Iowa State campus in Ames, including Bartholomae.

As the two parties explore their new relationship, tribal leaders have asked for help with other emerging issues, such as bullying. Blackcloud said the Meskwaki could benefit from Iowa State’s assistance on topics ranging from youth leadership to elder and youth initiatives, language revitalization connecting elders and youth, civic engagement, and strategic planning.

A 4-H youth program specialist, Norma Dorado-Robles of Marshall County, is shadowing Mukayisire with the goal of continuing to provide services to youth of the Meskwaki Nation. The 4-H youth development program includes curriculum to combat bullying.

Iowa State University has over the past year begun to offer research-based financial education classes to youth, adults, and seniors of the Meskwaki Nation in Tama.

“A key to our success with the Meskwaki Nation is to build a relationship with community leaders and members that establishes trust and respect.”

Suzanne Bartholomae brings financial education, outreach to Iowans on campus and across state