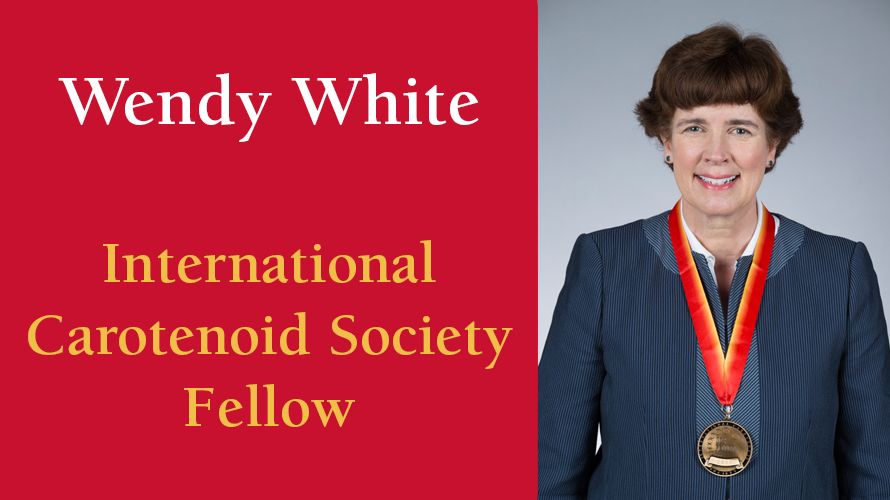 Wendy White, an associate professor in food science and human nutrition at Iowa State University, has been named an inaugural fellow of the International Carotenoid Society.

White studies the bioavailability, or absorption efficiency, of carotenoids — colored antioxidant pigments that are abundant in green, yellow-orange, and red fruits and vegetables. Several dietary carotenoids, including beta-carotene, are converted to vitamin A in the body.

“Dr. White is an internationally recognized expert in carotenoid measurement and assessment of bioavailability,” said Ruth MacDonald, professor and chair of food science and human nutrition. “She has independently developed techniques to very accurately detect quantities of these complex compounds in human blood that allowed very precise and accurate experiments to be conducted. Her work has significantly impacted the field of vitamin biochemistry and human health. Being named a fellow by this organization is clear recognition of her outstanding research career.”

The International Carotenoid Society provides, supports, and encourages all areas of carotenoid science and increases public awareness of advances in the field of carotenoid research. Its fellow designations, presented in July at the 18th International Symposium on Carotenoids in Lucerne, Switzerland, recognize members whose consistent contributions to the organization, the scientific community, and the general public demonstrate a commitment to excellence, leadership, and sound ethics.

“I greatly respect the leadership of the International Carotenoid Society,” said White, who’s also the Charlotte E. Roderuck Faculty Fellow in food science and human nutrition. “The organization is governed by leaders who are respected not only for their outstanding research, but also for the way in which they interact with other scientists and their ethical conduct.”

In selecting White for the honor, the society noted White’s contributions to carotenoid research, including her decades-long, consistent contributions to the Gordon Research Conferences. The conferences, founded in 1931, serve to advance scientific research in the biological, chemical, and physical sciences.

“Maintaining your status as an expert in your field is very challenging if you don’t participate in the conferences,” White said. “The point of the conferences is to present research that hasn’t been published yet. The field changes so fast.”

Established in her field

White’s contributions to the field of carotenoid research are well-established. In 2004, she was internationally recognized for her role as principal investigator for a study that showed full-fat dressings increased carotenoid absorption, or bioavailability, from vegetables in salads.

Recently, White and her collaborators, including University Professor of Statistics Philip Dixon, completed a follow-up study that used statistical modeling to show that the absorption of multiple fat-soluble vitamins as well as four carotenoids after consuming salad vegetables was proportional to the amount of added vegetable oil in salad dressing. Both studies were published in the top-ranked American Journal of Clinical Nutrition.

White is also known for her research contributions to the development of biofortified foods, which are helping to alleviate vitamin A malnutrition in countries where deficiencies are prevalent.

“In low-income populations, it’s a matter of life and death,” White said. “Vitamin A deficiency impairs the immune system, and children die from otherwise survivable illnesses such as measles. But we can enhance people’s nutrition through beta-carotene biofortified staple crops, such as cassava and maize, because the beta-carotene is converted to vitamin A in the intestine and other sites.”

White said carotenoids are also critical to the health of individuals in developed countries like the United States. Lutein, a carotenoid found in green leafy vegetables, is accumulated by the retina to protect the eyes against blue light and serve as an antioxidant.

As lutein is deposited in the retina, it is highly concentrated in the exact spot needed for visual acuity, White said. This makes the carotenoid essential to clear vision in healthy eyes and to the prevention of age-related macular degeneration, found in more than 10 million people in the United States and the most common cause of blindness in individuals over the age of 55 in developed countries according to Foundation Fighting Blindness.

For White, who said she has always enjoyed the intellectual rigor of academic life, active participation in her research projects allows her to be a more effective mentor for her graduate students.

“I’m able to direct my graduate students in hands-on work and help them work through the tedium for the joy of discovery,” she said.

Wendy White, an associate professor in food science and human nutrition at Iowa State University, has been named an inaugural fellow of the International Carotenoid Society.

“[White’s] work has significantly impacted the field of vitamin biochemistry and human health. Being named a fellow by this organization is clear recognition of her outstanding research career.”