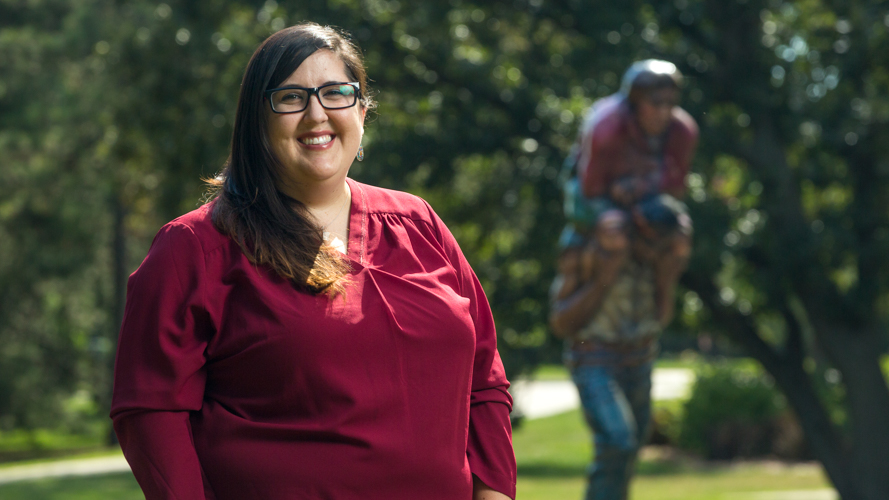 As Iowa continues to experience tremendous growth in its Latino population, Erin Doran will be at the forefront of helping colleges to better serve these students — and ensuring that they succeed.

“In a state with declining population where college graduates are leaving the state, Latinos are key to economic growth,” said Doran, a new assistant professor in the Iowa State University School of Education who grew up in El Paso, Texas, and received her doctorate at the University of Texas at San Antonio.

Doran specializes in research about Latina/o community college students — especially those who place into developmental or remedial education because they are deemed unprepared or underprepared for college-level coursework. Only 12.9 percent of Iowa Latinos over the age of 25 hold a bachelor’s degree or higher, compared with 27.7 percent of the general population, according to the Office of Latino Affairs.

“Considering the growth of the Latina/o demographic in Iowa and nationwide, especially in the community college sector, I am interested in building on my dissertation work on these students — especially in how institutions in the Midwest have responded to this newly arrived demographic and how statewide and institution policies are created to respond,” she said.

Doran’s expertise comes as Iowa prepares to have its first federally designated Hispanic-Serving Institutions, or HSIs. Since the 1980s, colleges and universities with a Latino enrollment of 25 percent or more can qualify for this funding from the U.S. Department of Education to expand educational opportunities for Hispanics and other underrepresented populations.

“In Iowa, there’s little experience with that,” said Lorenzo Baber, an associate professor in the School of Education who is the division head for higher education. “Erin’s scholarship can help inform what it means not just to have that designation, but what it means through practice and pedagogy to serve the Latino community.”

Marshalltown Community College and Western Iowa Tech Community College in Sioux City this year became the first in Iowa to be designated as Emerging Hispanic-Serving Institutions, which means they are approaching the 25 percent Latino student enrollment threshold. The nation has 472 colleges and universities designated as federal HSIs.

“In this era, we need to see more institutions address how we serve Latino populations across the state — not just in Des Moines, Davenport, and Cedar Rapids but Marshalltown, Sioux City, Mason City, and Fort Dodge,” Baber said. “Erin will be situated in the center of that policy development. As a land-grant institution, that’s what we want to see our faculty do.”

Doran aims to help community colleges better understand the diversity of these new Latino students, and what adjustments can be made for them to be successful. She said attending the 2017 Iowa Latina/o Education Initiative Conference showed her how thirsty Iowa educators are for knowledge of how to better serve Latino students.

Doran spent the past year as a visiting professor at Iowa State. This fall, she joins the Division of Higher Education in the School of Education on a more permanent basis. Her colleagues in that division include Baber, Michael Brown, Brian Burt, Jan Friedel, Ann Gansemer-Topf, Linda Serra Hagedorn, Rosemary Perez, Robert Reason, Sarah Rodriguez, Dian Squire, and Marlene Strathe.

Doran brings 15 years of experience in higher education including eight years as a student development specialist at the University of Texas at San Antonio. She is from a family of educators — both her parents were public school principals. Her grandfather, Abel Paredes, was especially influential in emphasizing the importance of pursuing a college education.

“She’s a quality teacher. She’s an emerging scholar. She has infused herself in the community,” Baber said. “Iowa State is lucky to have her. She just brings so much to our program and has done it seamlessly.”

Before coming to Iowa State, Doran received the 2016 Dissertation of the Year Award from the Council for the Study of Community Colleges. Her dissertation examined the experiences and perceptions of faculty members at a Hispanic-serving community college who teach developmental reading and writing in a new integrated format.

Doran also served as director of research and evaluation for Catch the Next-Dream Catchers, a Texas-based program that promotes the retention and success of community college students, particularly Latino students, who place into developmental or remedial education.

She said the program showed her the power of providing students with a curriculum that speaks to them — whether it be in Spanglish, a hybrid of Spanish and English, or whether it’s being taught by faculty members who look like them.

“At Iowa State University, I see the opportunity to connect my research agenda in an area that is experiencing a tremendous growth in its Latinx population,” she said.

As Iowa continues to experience tremendous growth in its Latino population, Erin Doran will be at the forefront of helping colleges to better serve these students — and ensuring that they succeed.

“At Iowa State University, I see the opportunity to connect my research agenda in an area that is experiencing a tremendous growth in its Latinx population.”