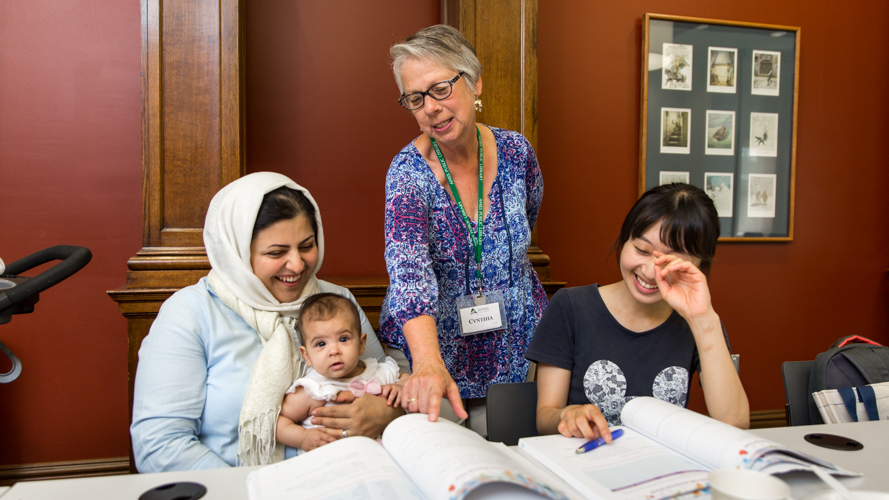 About 80 families with babies have graduated from Small Talk Story County since the pilot program began in Ames in fall 2015. The partnership between Iowa State, the Ames Public Library, and Raising Readers in Story County helps families to improve the quality and quantity of language in their homes.

“It helped me refocus everything and reprioritize,” said Stephanie Brown of Huxley, who participated in the program with her son, Maccabee. “I’ve been getting down on my youngest son’s level a lot more than I used to. I’ve been waiting for him to respond so it’s not just me talking at him. He understands that it’s an interactive relationship and not just me being in charge.”

This month, Small Talk will expand to Boone and Marshalltown. It’s another step toward the goal of the early childhood literacy program being offered statewide. Conversations about the program are underway in Sioux City and Muscatine. People from other states have also called, inquiring about Iowa’s program.

“Parenting is really hard and you actually don’t get a lot of positive feedback or metrics on how you’re doing as a parent,” said Constance Beecher, an assistant professor in the School of Education and state specialist in family literacy with Human Sciences Extension and Outreach. “What we find is that the parents really want more information. We’re offering them information about their parenting practices, and they’re sad when it’s over.”

Research shows that children who grow up in lower-income households hear less language than those in homes with more resources. By age three, this difference can add up to millions of fewer words and conversations — leaving children less ready to start kindergarten and giving them greater potential for academic, social, and emotional difficulties.

Small Talk aims to address this language gap. Families specifically recruited to participate include those already involved with Early Head Start and the Women, Infants, and Children program.

“We’re building a superhighway that will enable them to get to reading efficiently and quickly without much trouble,” Beecher said. “When children hear less language, they get more like a two-lane blacktop. They can still get there, but it’s going to be slower, it’s going to be more effortful, sometimes they need onramps. So we’re just trying to make sure that kids who might be at risk for slower development have a good start.”

Parents participating in the 13-week program learn strategies for talking more with their children between birth and 30 months. Babies wear a specially designed vest containing a LENA recorder, a digital device that can record up to 16 hours of data. The device acts as a “language pedometer” recording words heard by the child during the day, the number of parent-child exchanges, and the amount of electronic noise from the television — then translating the recording into data.

Small Talk has seen significant success since its inception two years ago. Data collected show an increase in the amount that parents talk with their children, in parents’ knowledge of child development, and in children’s language development.

“In our initial look at the data, we’ve definitely seen that we had significant increases in adult words, especially for those who are below the 25th percentile, and those are people who would be our target,” Beecher said. “We’ve also seen accelerated language development in the kids.”

Brown said when she started the class, her son was receiving services from Heartland Area Education Agency for developmental delays. But by the time they finished the class, he was on track with his peers.

“AEA and LENA were both instrumental in giving me the resources I needed. It’s just absolutely amazing,” said Brown, who moved here from South Carolina. “The supports that are offered in Iowa, I haven’t found anywhere else. There’s no other place we’d rather be. We’re not native Iowans but we’re staying here specifically because of how child-friendly it’s been. Nothing beats Iowa in terms of caring for children.”

It takes a village

Beecher is part of a national research network called Bridging the Word Gap, which aims to reduce the number of children who enter school with delays in language and early literacy. The University of Minnesota, University of Pennsylvania, and Texas Children’s Hospital are also testing the LENA equipment and curriculum in different settings.

Small Talk Story County was made possible in part by a three-year, $435,000 grant from an anonymous foundation to the Ames Public Library Friends Foundation. In January, the program captured first place and received a $10,000 grant from Penguin Random House’s Library Awards for Innovation, which recognize innovative library programs that engage citizens in reading and strengthen the social and cultural fabric of their community.

The program requires significant partnerships. About 100 volunteers have provided much-needed child care during the class over the past two years. About 75 percent of those volunteers are Iowa State students. Some are fulfilling course requirements, but many continue to volunteer because they said they enjoy interacting with the children. Brown, the Huxley mother who participated in the program, has also become one of those volunteers.

“I just felt like we got so much from it that I wanted to give back,” she said. “I can see how much these people care about the kids. I wanted to volunteer so this program can continue.”

ISU Extension and Outreach is increasing its involvement in the program, with both Alexandria Merk and Malisa Rader providing training for the new efforts in Boone and Marshalltown.

Leslie Dooley and Melissa Clucas, two graduate students in human development and family studies, will be parent educators with Small Talk. Graduate students Craig Van Pay in the School of Education and Neil Rowe in human development and family studies are working with Beecher on the program. Undergraduates involved include Ashley Wilkins, a senior in early childhood education, and Paige Auckland, a psychology student taking honors research credits with Beecher.

Families interested in participating in Small Talk should contact project coordinator Kay Marner at 515-239-5673 or smalltalk@amespubliclibrary.org. The program also welcomes volunteers and donations of gift certificates for food and books.

“We’re just trying to make sure that kids who might be at risk for slower development have a good start.”