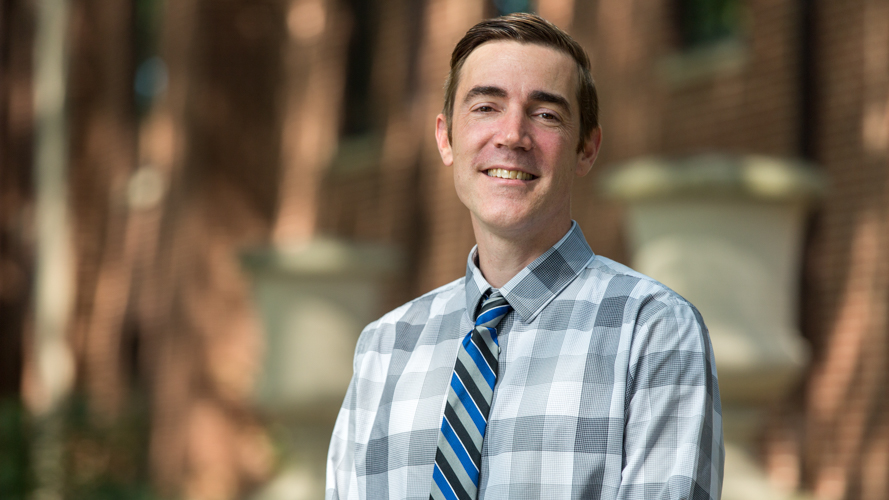 After several years of collaborating with Iowa State University, Jim Lang officially joins the faculty here this fall with a speciality in exercise physiology — or understanding the mechanics behind how the body responds to movement.

“He has a strong background in cardiovascular exercise physiology in the microvascular area,” said Warren Franke, a professor and associate chair of kinesiology who directs the ISU Exercise Clinic. “He studies mechanisms that affect blood flow in the microvasculature, or the smallest vessels, of the skin.”

Lang brings that expertise to Iowa State as a new assistant professor in kinesiology. He aims to make an impact with his research.

Research findings by Lang have been recognized nationally by his peers.

A study by Lang and Kevin Smaller published in June by Experimental Physiology found that oral supplementation of L-tyrosine — an amino acid used to produce noradrenaline and dopamine — may improve older adults’ tolerance to the cold.

“We have some preliminary data that shows if older adults take tyrosine before going into the cold, that they can better maintain their core temperature while in the cold,” he said.

Lang presented those findings at the Wilderness Medical Society’s annual summer meeting held July 28 to Aug. 2 in Breckenridge, Colorado, where he was awarded best oral presentation.

Another study by Lang and Kelsey Kolb published in 2015 by the American Journal of Physiology – Heart and Circulatory Physiology found a unique relationship between aging and angiotensin II — a chemical in the body that affects the cardiovascular system in various ways, including narrowing the blood vessels.

“What we’re finding is there’s greater reliance upon angiotensin II function in the vessels of older women,” he said. “That may be problematic and something we are going to explore further. Does this explain in part the loss of cardiovascular protection after menopause?”

That article was featured as the journal’s “editor’s pick.” Lang was invited to do a podcast interview about the research with the journal’s associate editor.

Lang served as an assistant professor in physical therapy at Des Moines University since 2013. He has been affiliated with Iowa State since 2014, holding a collaborative faculty appointment in kinesiology.

He and Franke serve as co-major professors for a doctoral student. He also works with kinesiology professor Rick Sharp on a year-long resistance exercise training intervention. Sharp’s study tests the effectiveness of combining supplements and resistance training in older adults with low vitamin D levels.

The move also brings Lang to a Research 1 university — identified as a doctoral university having the nation’s highest level of research activity, according to the Carnegie Classification of Institutions of Higher Education.

Taught in several other states

“I have had excellent mentorship in teaching,” Lang said. “This has also been enriched by teaching in a clinical setting such as DMU. My fundamental goal for students is for them to understand and apply concepts through mechanistic thinking (i.e., learning-by-doing approach).”

Franke said Iowa State provides a good environment for Lang, as his interests are strongly aligned with what the Department of Kinesiology does here.

“He likes doing research. He is a productive scholar,” Franke said. “But he also has a lot of experience in the classroom. He understands the value of teaching and mentoring the next generation. He understands the culture that we have in the department. His transition here will be somewhat seamless.”

“Another strength is how well he relates to our graduate students and how well he communicates as a teacher,” she said. “We anticipate him being a solid faculty member on all fronts.”

Jim Lang is an exercise physiologist who specializes in cardiovascular physiology. He studies mechanisms that affect blood flow in the microvasculature, or the smallest vessels, of the skin.

“Changes in microvascular function precede more serious vascular problems and ultimately cardiovascular disease. We’d like to … be able to detect some diseases at a very preclinical or early-disease stage.”