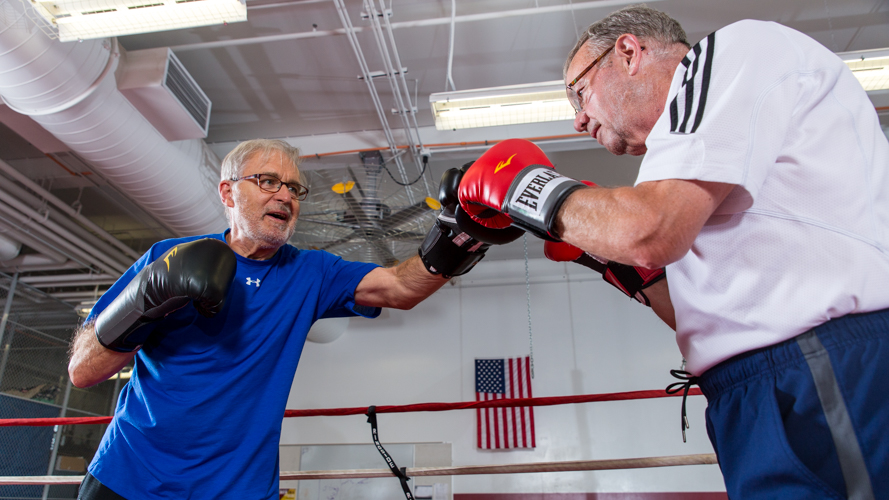 In the 1976 film “Rocky,” boxer Rocky Balboa tells his girlfriend Adrian that he fights because he can’t sing or dance. Elizabeth Stegemöller, an assistant professor in kinesiology at Iowa State University, is helping people with Parkinson’s disease do all three.

In her latest outreach effort, Stegemöller, a neuroscientist who leads Parkinson’s singing groups and music and movement groups, has formed a research partnership with Olivia Meyer, a National Collegiate Boxing Association national champion in 2014 and 2015.

Meyer, recipient of last spring’s Barbara E. Forker Leadership Award, is a May 2017 graduate in kinesiology and health who this semester is beginning her graduate studies at Iowa State. The Cyclone Boxing Club’s assistant coach for women is using her knowledge of the sport to build both the cognitive and physical development of those with Parkinson’s disease.

“With the boxing program, we work a lot on proper footwork, because if people hit something, we don’t want them to fall,” Stegemöller said. “There’s also the cognitive development — when we call out the shadowboxing, they have to remember the right movement. With the movement sequencing, we focus on big, fast, forceful movements.”

This one-two punch of cognitive and physical development gives people with Parkinson’s disease the ability to strengthen muscle memory and avoid the freeze of movement that is common with Parkinson’s.

In each boxing class session, participants follow Meyer’s lead, with the assistance of undergraduate students. The moves are the “real deal” — the same used by Meyer during her days in the ring.

“With my graduate research, I have a lot of control in what I’m doing,” Meyer said. “This is a project that I’m really passionate about. It uses all the things that I had learned I wanted to do — training, research, and teaching — all wrapped up into one. Everything just fell into place, and I couldn’t have asked for better mentors.”

Bruce Schwering, a boxing class participant who met Stegemöller through her music therapy outreach, first heard of the boxing-and-Parkinson’s connection after viewing a 60 Minutes segment from 2015, the year he was diagnosed with the disease. He took part in a boxing class at Ankeny’s On With Life, and posed the possibility of an Iowa State boxing class to Stegemöller.

“Dr. S has been very supportive of anything that uses different methods to help with Parkinson’s,” Schwering said. “This is true boxing. There’s a lot of camaraderie.”

Meyer senses the camaraderie, too. She said it’s the individualized attention that makes the class unique.

“Previous research definitely fueled how we communicate what we want from the class participants,” Meyer said. “But I’m making modifications as I work with them and find what maneuvers are difficult for people with Parkinson’s. The difference with this boxing program is that I’m training participants in the fundamentals. We work a lot on proper footwork to maintain balance — it’s a lot of one-on-one.”

Meyer said the research-based approach sets the Iowa State program apart from others springing up across the country.

“We get the big movements from the participants that research has shown are beneficial,” Meyer said. “When they throw punches, we want them to make faces or make noises — breathing from the diaphragm. It isn’t a group fitness class. We’re teaching people how to box. Most of the drills I’m doing with them are drills I’ve taken from my years of boxing for Iowa State.”

For Meyer, working alongside people with Parkinson’s is personally rewarding.

“The neatest thing is watching how quickly they improve, and how much they look forward to the class,” she said. “They aren’t sparring one another, obviously, but just being able to hit something and see themselves improve is rewarding. When I call out the numbers for shadowboxing, some of them know them even better than I would. It’s impressive how quickly they pick up on the patterns and how much they take in the program and adapt so well.”

Stegemöller and Meyer are also partnering with Cathy Hockaday, a human sciences specialist with ISU Extension and Outreach, to expand the boxing program’s impact.

Hockaday oversees the Strengthening Families Program: For Parents and Youth 10-14 outreach initiative, a seven-week, preventative program aimed at helping families as their children approach adolescence. The Iowa State researchers will work with USA Boxing to train at-risk youth in the boxing program. The youth will work alongside people with Parkinson’s disease, forming a mentor-mentee relationship. The program is seeking votes for a $50,000 Encore prize. Online voting via bit.ly/encoreprize ends Aug. 31.

Iowa State University researchers are using shadowboxing to build the cognitive and physical development of those with Parkinson’s disease.

“We get the big movements from the participants that research has shown are beneficial.…Most of the drills I’m doing with them are drills I’ve taken from my years of boxing for Iowa State.”

Festival highlights benefits of music for people with Parkinson’s disease