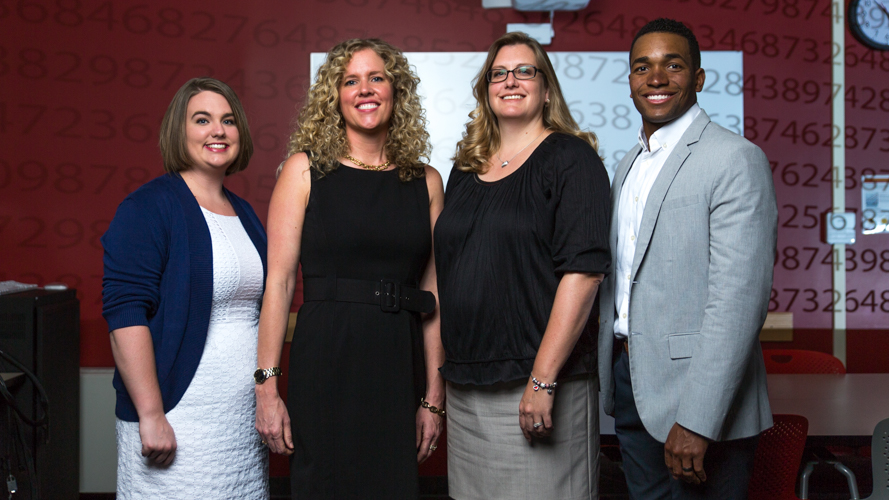 Human scientists at Iowa State University are at the forefront of exploring “big data,” turning vast amounts of data into usable knowledge with real-world implications for children and families.

Heather Rouse and Cassandra Dorius, both assistant professors in human development and family studies, are using existing data to help the state solve problems and make evidence-based decisions in the areas of public health, education, and child welfare. The numbers allow them to be strategic in identifying “low-hanging fruit” among problems needing to be solved, and targeting people who need help the most.

“We live in a world where everything we do produces data and if we can capture it and use it more effectively and efficiently, we could improve lives,” Dorius said. “It’s a ripe area for looking at how to use data to promote the well-being of families and vulnerable children. This really is one area of big data that has been relatively under-tapped.”

Making sense of the data

Iowa State researchers employ cutting-edge statistical techniques and experience to analyze the data. They don’t view any single person’s data individually, but instead find connections and patterns. Partnering with state agencies and other service providers, they look through data to identify possible solutions.

“Our public service systems collect a lot of data,” Rouse said. “Those data could be really valuable if we better understood what was in those data systems. How can we use that information for research to make evidence-based connections for kids, particularly vulnerable kids?”

Rouse brings the experience of working with big data in other cities to improve the lives of children and families. For example, she was part of a team in Philadelphia that worked with city government to conduct research using administrative data to inform significant policy changes, including:

—Early childhood: Research identified areas of the city that had no access to quality early childhood centers but had a disproportionate number of kids exposed to risks such as homelessness, maltreatment, and teenage pregnancy. The data fostered strategic investments in access to quality early care experiences for areas of the city with the greatest need.

—Foster care: Another study uncovered a significant portion of children who entered foster care during later elementary school had also stayed in a public housing shelter with their moms sometime in the last three to four years. That led to a coordinated effort among the city’s public housing and child welfare departments to identify young moms as soon as they enter public shelters, so they could streamline access to prevention resources such as health care, employment, and early child care.

For the past two years, Iowa State researchers have partnered with Early Childhood Iowa, formerly called Iowa Community Empowerment. The initiative established by the Iowa Legislature unites communities with state government to improve the well-being of Iowa’s youngest children and their families.

Additional partnerships are underway as researchers apply their expertise to help state agencies tackle challenges. Such collaborations align with Iowa State’s land-grant mission to share knowledge with the citizens of Iowa through teaching, research, extension, and outreach. Human scientists are uniquely trained for this work.

“Our foundational disciplines are about studying people,” Rouse said. “We’re talking about working in complex systems that need to understand families as a system. Having that background understanding of how children and families work, that’s what makes this a good fit for human scientists. It’s about the people. Without the human element, statistics don’t mean anything.”

Preparing the next generation

Graduate students are critical to the effort of applying data-driven techniques in public service agencies.

Melissa Denlinger, a doctoral student in human development and family studies, became the first graduate student on the research team to complete a policy-research internship with the Iowa Department of Public Health. She worked directly with department leadership on research to inform evidence-based practice and improve effectiveness in the area of home visiting for families with young children.

Quentin Riser, another graduate student on the research team, is studying ways that national early childhood data can inform efforts at the local level. In recognition of his work, Riser received a 2017 National Science Foundation Graduate Research Fellowship Program Fellowship. He also won a minority training award from the Society for Research in Child Development.

“We are trying to help train students in a way to take on the challenges of the 21st century,” Dorius said. “We’re training them to be better consumers and users of this data. We are helping to equip future faculty members and government agency workers with the knowledge they need to make sense of this quickly changing world.”

Funding for this research has been awarded from Iowa State, the College of Human Sciences, the Iowa Department of Public Health, the Midwest Big Data Hub (through the National Science Foundation), and the Milbank Memorial Fund.

Human scientists at Iowa State University are at the forefront of exploring “big data,” turning vast amounts of data into usable knowledge with real-world implications for children and families.

“Without the human element, statistics don’t mean anything.”