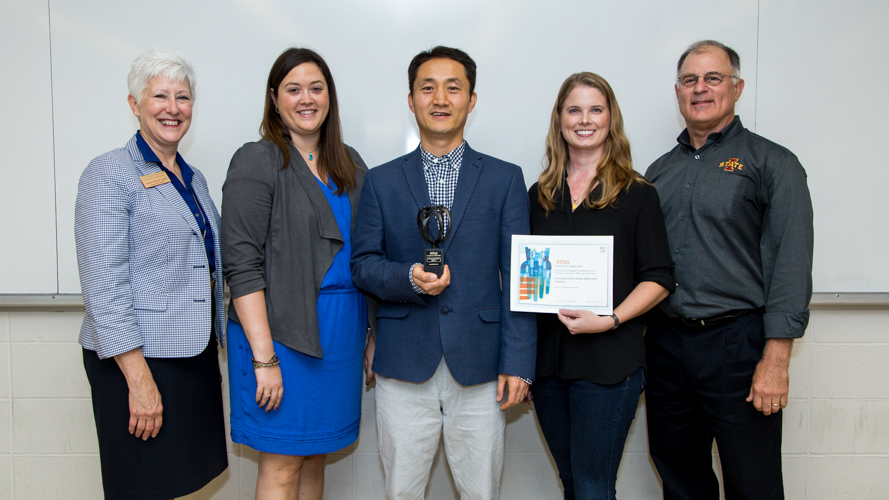 The findings, published by the journal Progress in Cardiovascular Diseases, show that running is the single most effective lifestyle factor in increasing life expectancy, even more important than obesity or smoking from a public health perspective.

The published article was selected for an Elsevier Atlas Award from recently published articles in more than 2,500 journals due to its significant impact on people’s health worldwide. An international scientific committee made the award selection.

Elsevier publishes more than 20,000 products for educational and professional science and healthcare communities worldwide. The organization strives to ensure the successful implementation of published research findings by increasing the awareness of scholars’ work.

“Elsevier helps researchers make new discoveries, collaborate with their colleagues, and give them the knowledge they need to advance their fields,” said Heather Luciano, publisher of Progress in Cardiovascular Diseases. “Through Elsevier’s Scientific, Technical, and Medical Journals program, we commission and publish the top research, and in this case, have awarded recognition to this study coming out of Iowa State University for its potential impact on society and its role in advancing cardiovascular disease and exercise science research.”

The Atlas Award-winning study involved researchers analyzing and expanding a 2014 study that showed running 5 to 10 minutes a day reduces the risk of death from cardiovascular diseases. The expanded study was in direct response to questions from the scientific community.

“Scientists were interested that we found no further benefits after a certain amount of running — about thirty miles per week,” said Duck-chul “DC” Lee, an associate professor in kinesiology who served as the study’s lead author. “It was a big question mark. You think, ‘the more, the better’ in terms of physical activity and health. It became a hot topic in the field.”

Data from more than 55,000 individuals who participated in the Aerobics Center Longitudinal Study revealed the runners had a 25 to 40 percent reduced risk of premature mortality. They lived approximately three years longer than non-runners — which equates to seven hours of life expectancy gained for every hour spent running.

The results showed that running had no significant negative effect for most populations. Those with a history of coronary heart disease saw significant health benefits by running less than 80 minutes per week.

“Our review found that there weren’t substantial differences in the mortality benefits across the spectrum of times or frequencies in which people participate in running,” said Angelique Brellenthin, a postdoctoral research associate who joined Lee in the research. “Maximum health benefits were achieved with relatively low doses of running.”

The findings also pointed to running’s benefit over other forms of vigorous-intensity exercise. They also stressed the relative ease of taking part in the activity.

“Compared with other types of vigorous-intensity sports and exercises, running mitigates many barriers to being physically active,” the researchers state in the published study. “Running is easily accessible and convenient since it doesn’t require a gym membership or specialized equipment or training.”

Lee said there’s no limit to the amount of time most people can participate in the activity.

“We still didn’t find a significant harmful effect of running too much on mortality including cardiovascular mortality,” Lee said. “You might not get further benefits, but you will not harm yourself.”

Lee’s research is ongoing. The running study led his team to ask more questions, such as whether a combination of varied exercise regimens produce a positive effect.

“In the CardioRACE study, we have four different types of exercise: running only, weight lifting only, half and half, and no exercise,” Lee said. “The question is, ‘What type or combination of exercise is most effective for cardiovascular disease prevention?’”

Brellenthin said the research helps to answer many of the simple, yet essential questions policymakers have when developing national physical activity guidelines.

“Our research outcomes not only impact the elemental questions we think about when it comes to our health, but also directly shape the health behavior messages that are relayed to the public — which is rewarding,” she said.

“Scientists were interested that we found no further benefits after a certain amount of running — about thirty miles per week. It was a big question mark. You think, ‘the more, the better’ in terms of physical activity and health. It became a hot topic in the field.”