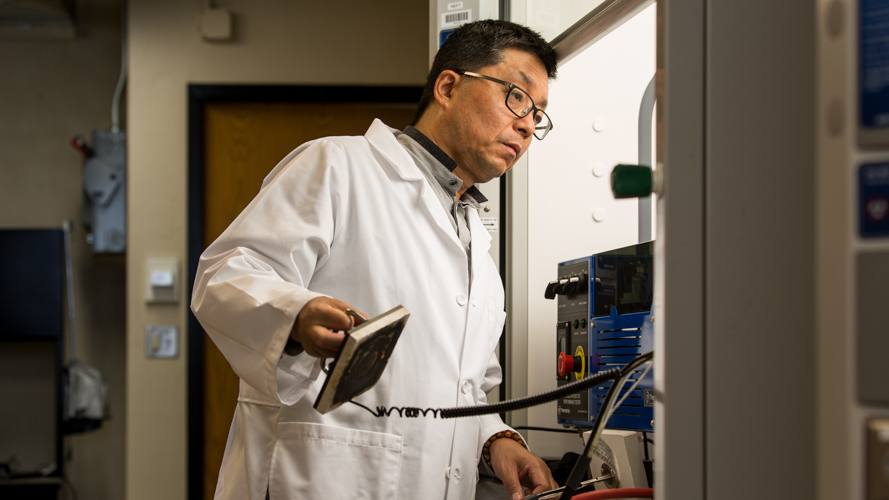 Interdisciplinary research at Iowa State University in the College of Human Sciences is improving the safety of those who wear protective clothing.

“Our overall goal is to provide protection, safety, and health to human beings by revolutionizing new textile materials and functional design,” said Guowen Song, the Noma Scott Lloyd Chair in Textiles and Clothing. “Our research deals with the human body and hazards — and with polymers, and textile material, and garment design.”

“We go all the way from the material, to the clothing design and system design,” Song said. “We see how the material and the design functions by using manikins and controlled human trials.”

The manikins are far from the regular department store variety. They’re “sweating” manikins, complete with temperature sensors within the “skin” that record heat and moisture management data.

“We begin with lab-based, bench work — then we roll out human trials,” said Warren Franke, a professor in kinesiology who is leading the human trial phase of the research with Hector Angus, an assistant scientist in kinesiology.

This summer, the researchers are conducting the latest step in the project aimed at analyzing the body’s physiological strain and physical burden while wearing chemical protective clothing — a study that in May 2015 received a $150,000 College of Human Sciences seed grant. Earlier projects received grants from the U.S. military and the National Institute for Occupational Safety and Health.

Franke and Angus, with assistance from sophomore Nicole Kling in pre-diet and exercise and seniors Dani Kern and Kelsey Cohoon in kinesiology and health, test the body’s ability to thermoregulate — or maintain a safe core body temperature — when wearing protective gear.

While Song and his team of postdoctoral researchers and graduate students analyze heat resistance and user comfort, the kinesiology team focuses on how the body interacts with the clothing. Xinwei Wang, a professor in mechanical engineering, is also a research team member.

“A protective suit might guard against the Ebola virus, but common geographical regions of Ebola exposure are often hot,” Franke said. “We monitor the oxygen consumption, cardiovascular stress, and thermoregulatory stress of those who wear the equipment.”

Interdisciplinary research at Iowa State University in the College of Human Sciences is improving the safety of those who wear protective clothing.

“Our overall goal is to provide protection, safety, and health to human beings by revolutionizing new textile materials and functional design.”

Clothing aims to improve health and safety of firefighters