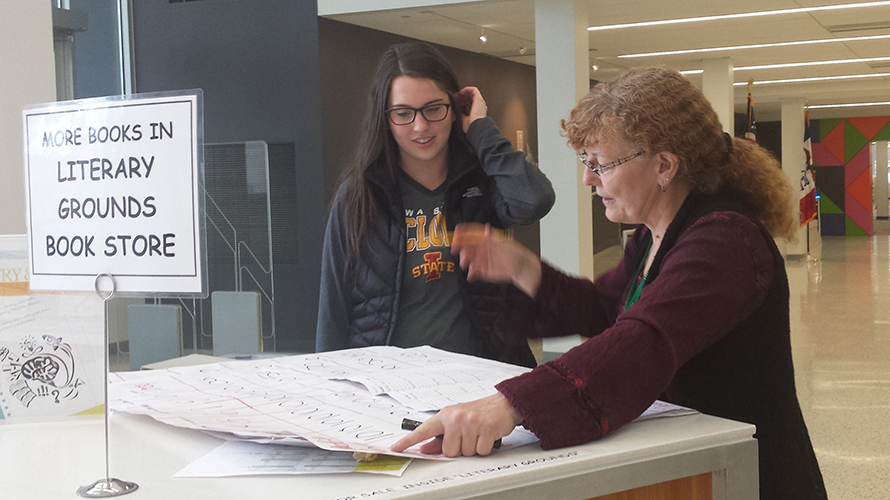 Iowa State University students are helping middle schoolers get excited about reading through a challenge called Battle of the Books.

Students in Sara Nelson’s CI 378 class — Teaching of Reading and Language Arts in the Intermediate Grades — this year helped facilitate a sixth-grade Battle of the Books, and created questions for a new seventh-grade battle that Ames Public Library will hold for the first time this fall.

Battle of the Books is a challenge where students form teams, read a designated list of books, then meet at the Ames Public Library for a final competition. Questions in the competition are based on facts from the books. Students have several months to read and prepare before the battle.

“I ran into a teacher at the sixth-grade battle,” said Sara Nelson, a graduate student in the School of Education who teaches CI 378. “She said for them, it’s changed their whole school. Everybody’s excited to read. They actually started a fourth-grade one because they were so excited to prepare for the fifth- and sixth-grade one.”

The excitement and interest in the battles have also inspired a Harry Potter Battle of the Books for families, teens, and adults that the library will hold Aug. 18 and 20. The top two winners of each battle will go on to a “Ultimage Tri-Wizard Trivia Tournament” on Aug. 27. Thirty teams are already signed up for the event.

Building a passion for reading

Twenty-seven teams from all over central Iowa, each with four students, gathered for the sixth-grade battle on April 7. After about nine months of reading and preparation, five teams faced each other, and each team had 30 seconds to answer a question.

Olivia Hansen, a senior in elementary education, kept scores for the sixth-grade battle.

“You could almost feel the tension and nervousness in the room as each group was waiting to hear if they were correct,” Hansen said. “I think the thing that surprised me the most was how detailed the questions and responses were. I remember one group mispronounced the name of a character and it was marked wrong. I was incredibly impressed by the amount of preparation each team member had to do prior to the battle.”

Librarians choose 18 books for the battles. Those selected typically consist of award-winning books and include different genres — from biographies to graphic novels. The 2017 sixth-grade list includes Number the Stars by Lois Lowry, The Maze Runner by James Dashner, and Escape! The Story of the Great Houdini by Sid Fleischman.

Many of the Battle of the Books teams have matching T-shirts. Nelson said one team this past spring called itself the “Readaneers,” like buccaneers. Students on the team dressed like pirates.

“When you get there, you realize how important it is to all these fifth-, sixth-, and seventh-graders and how much they enjoy it,” Nelson said. “When you see them all in their T-shirts you just smile, because that’s what we should be doing — we should be making these events where people are really excited to read, talking about books, and engaging with books, and seeing that there are other people who like to read as much as they do.”

Jerri Heid, the youth services manager at the Ames Public Library, brought the program to Ames for fifth graders in 2009 and added a sixth-grade battle in 2010.

“It really brought the community together,” said Shannon Iskowitz, a senior in elementary education, who helped at the sixth-grade battle. “Parents, extended family, teachers, peers, and Iowa State students came to help out and watch the competition.”

The Iowa State students were key in creating a new seventh-grade battle that will be held in the fall. They read the books selected by the librarians and created a list of about 30 questions for the students to battle over.

Seth Rosekopf, a senior in elementary education who helped create the questions for the seventh-grade battle, said that the partnership represents Iowa State well to the community.

Nelson said the partnership not only helps the community, but also shows her teacher education students a model they can use in their own future classrooms.

“Battle of the Books is a wonderful way to get children excited about reading, as well as an awesome tool to help students reach the comprehension levels desired by many teachers,” said Aubrey Hill, a senior in elementary education who helped create questions for the seventh-grade battle.

“The more we can get books into children’s hands, the more likely we are to build a passion for reading that will only continue to grow throughout their young lives,” Hill said.

Iowa State students help to build middle schoolers’ excitement for reading by facilitating the Battle of the Books at the Ames Public Library.

“The more we can get books into children’s hands, the more likely we are to build a passion for reading that will only continue to grow throughout their young lives.”