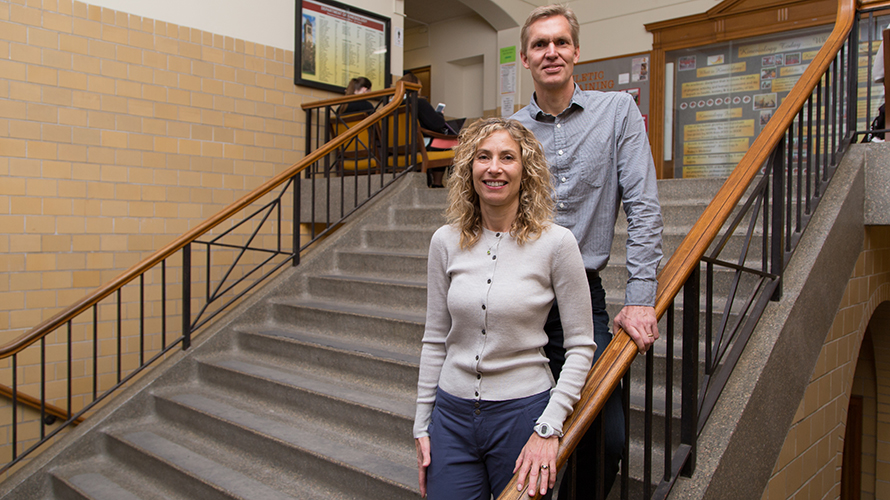 The professorship recognizes department faculty who have distinguished themselves as outstanding scholars in the field of kinesiology through their research, outreach, teaching, and mentoring. Support from the professorship will enhance the scholarly and professional activities of the recipients.

“Dr. Kohut and Dr. Welk are highly productive faculty in the department who have built strong records of scholarship over many years of dedicated service to Iowa State University and the Department of Kinesiology,” said Philip Martin, professor and chair of kinesiology. “They are both recognized by their peers nationally and internationally as leaders in their areas of specialization and the field of kinesiology.”

Research by Kohut and Welk has advanced the understanding of the effects of acute and chronic physical activity on human health and well-being across the lifespan. Funds generated by the endowment may be used to support graduate assistant or postdoctoral stipends, research expenditures, outreach initiatives, and other professional activities.

Welk has established himself as a national leader in developing and evaluating methods to measure physical activity and creating intervention programs that promote exercise and healthy eating among young people.

His research focuses on the assessment and promotion of physical activity. He has studied various activity monitors, including popular consumer-based models such as the Fitbit, including testing their accuracy and how these tools can be used to promote physical activity behavior in the population.

Welk is also the scientific director of FITNESSGRAM, a national youth fitness testing program, and has launched a participatory research network, the Iowa FITNESSGRAM Initiative, which provides support on the effective use of FITNESSGRAM and helps schools test new strategies to promote and enhance physical activity and education.

He plans to use the supplemental funding from the Forker Endowment to strengthen and support outreach programming focused on promotion of active, healthy lifestyles on campus and in community, worksite, and clinical settings.

Welk oversees the Department of Kinesiology “ExerCYse” program which is focused on advancing the national ‘Exercise is Medicine’ movement. He also coordinates outreach programming that enables students to contribute to health and wellness efforts in schools, worksites, and community agencies.

“I am extremely honored to have received this Endowed Professor award,” Welk said. “I look forward to working with our faculty and students to expand outreach and service learning programming so that we can amplify our impact on the campus and in the community.”

Kohut’s multidisciplinary research into the effects of exercise and aging on the human immune system has earned her national and international recognition.

She researches how aging, stress, exercise, and nutrition affect immune response to virus infection or vaccines. Her research was the first to show the beneficial effects of exercise on vaccine responses in older adults.

Her research has also shown that a year of moderate exercise can improve the immune system response in obese adults, who typically produce a less vigorous response to vaccinations.

Kohut has published 61 papers in outstanding peer-reviewed journals and garnered more than $4 million of funding as a principal investigator. Much of her research funding has come from the National Institutes of Health, a highly selective agency of the U.S. Department of Health and Human Services.

Kohut also works with graduate students, serving as a mentor and fostering creative thinking. She plans to use some of the funds for graduate student-initiated projects as well as new directions in research.

“I am deeply honored to be appointed to the Barbara Forker Professorship in Kinesiology,” Kohut said. “It is my goal to live up to the high expectations that Dr. Forker exhibited as a leader in this field.”

The endowed fund for the Barbara E. Forker Professorship in Kinesiology was provided by a generous gift in Forker’s estate after she passed away in 2010.

Forker was the first head of the combined co-ed Department of Physical Education at Iowa State. She began at Iowa State in 1948 as a temporary instructor while pursuing a master’s degree and remained until she retired as distinguished professor emerita in 1990.

Forker was advisor for Naiads (synchronized swimming) and involved in “I” Fraternity which honored outstanding women athletes.

During her time at Iowa State, she was involved in local and national organizations promoting health and wellness including serving as the vice president and later president of the American Association for Health, Physical Education, and Recreation.

Forker often spoke on Olympic sports and Title IX issues, giving more than 100 presentations. She served as a member of the U.S. Olympic Committee from 1975 until 1984. President Gerald Ford appointed her as a member of the President’s Commission on Olympic Sports, to investigate and revise the nature of U.S. amateur sport.

Iowa State University in 1997 renamed the Physical Education for Women Building to the Barbara E. Forker Building in her honor.

Forker was dedicated to the advancement in the field of physical education, now kinesiology, at Iowa State. The Barbara E. Forker Professorship in Kinesiology continues her vision of scholarly advancement in kinesiology.

Marian Kohut and Greg Welk have been named as the first recipients of the Barbara E. Forker Professorship in Kinesiology, which will support their research into the understanding of the effects of physical activity on human health across the lifespan.

“They are both recognized by their peers nationally and internationally as leaders in their areas of specialization and the field of kinesiology.”