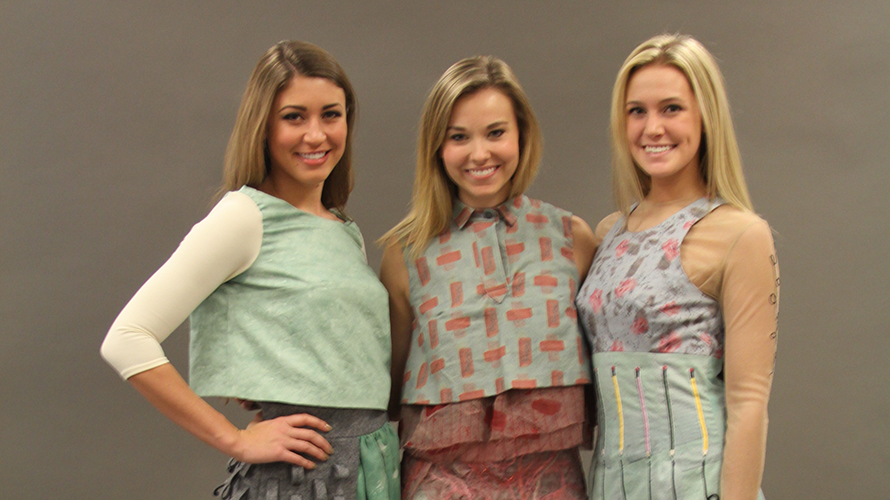 An Iowa State University student and alumna are among 20 designers who will showcase their collections next week at Omaha Fashion Week, the nation’s fifth-largest fashion event.

Designers are chosen by a panel of industry professionals who score them on innovation, concept, construction, marketability, and investability — or potential for financial returns. Seventeen designers will feature their work on the runway, while three will show their designs on platforms.

“Ultimately, designers who are chosen by the panel demonstrate the ability to create a collection with quality construction and a creative concept,” said Becca Walter, communications coordinator for Omaha Fashion Week.

Omaha Fashion Week is a red-carpet event that runs from March 15 to 20 and features three nights of shows. Both Bruce and Beam will have their

own fashion shows in which they can choose their own designs, models, music, lighting, and background.

Bruce, who is from Wheaton, Illinois, is also one of two producers for The Fashion Show 2016 at Iowa State University and a former intern for Marc Jacobs and Kate Spade New York. She was selected to present her collection as the final show next Thursday at Omaha Fashion Week.

Her upscale ready-to-wear collection includes eight looks and 17 garments inspired by the work of artist Andy Warhol — “something that is artistic and unique but also wearable,” she said.

The collection is an eclectic mix of women’s blouses, pants, skirts, and dresses made of digitally printed fabrics in toned-down greens, blues, purples and corals. Bruce developed three of her outfits as her senior capstone project.

d digital printing and looked at the beauty of everyday objects, such as office supplies,” said Eulanda Sanders, the Donna R. Danielson Professor in Textiles and Clothing.

“Kate not only used the digital textile printer to print all her fabrics, she also used our laser cutter and our computerized embroidery machine,” Sanders said. “Kate fully integrated our design technology with a variety of textile design techniques such as felting.”

Bruce will also enter her collection in The Fashion Show 2016 at Iowa State University, scheduled for 7 p.m. April 9 at Stephens Auditorium. In addition, she will show her collection at a fashion show at the Des Moines Social Club on April 28.

Omaha Fashion Week will also feature the work of Beam, a designer from Treynor who studied art and design in Italy and is a 2015 graduate of Iowa State’s apparel, merchandising, and design program.

Beam, who volunteered backstage at Omaha Fashion Week for the past three years, decided it was time to showcase her work on the runway this year.

Her collection of 12 looks and 25 garments has a haunted hotel theme based on Stephen King’s 1977 novel “The Shining,” which was also made into a British-American psychological horror film in 1980. The collection includes dresses, skirts, pants, tops, jackets, and sweaters.

Beam referenced the hotel with both the silhouettes and fabrication of the collection. The Overlook Hotel in The Shining has both ghosts from the 1930s along with its normal 1970s guests. Beam includes garment elements from both of these decades to represent all of the hotel’s residents, both living and deceased.

“I think you can clearly see sh

adows of a bellboy uniform in a few of the jackets as well as the collar of a few of the looks,” she said. “You can see the current guests with the collection’s turtlenecks and wide-legged trousers alongside those of the hotel’s more invisible residents with gathered sheer skirts and more classic silhouettes.”

Beam said she was also inspired by the antique furniture of a hotel, and referenced this with a fabric similar to one found on an upholstered seat or chair back of an antique sitting chair.

Iowa State University has done well in recent years at Omaha Fashion Week, which aims to nurture the youngest of fashion designers by providing mentoring, educational opportunities, and a professional platform to showcase their work.

ine featured custom-printed fabrics with unique cage-like layers in shades of marsala against black and white.

Iowa State student Kate Bruce and alumna Tirzah Beam are among 20 designers who will showcase their collections next week at Omaha Fashion Week, the nation’s fifth-largest fashion event.

“Ultimately, designers who are chosen by the panel demonstrate the ability to create a collection with quality construction and a creative concept.”