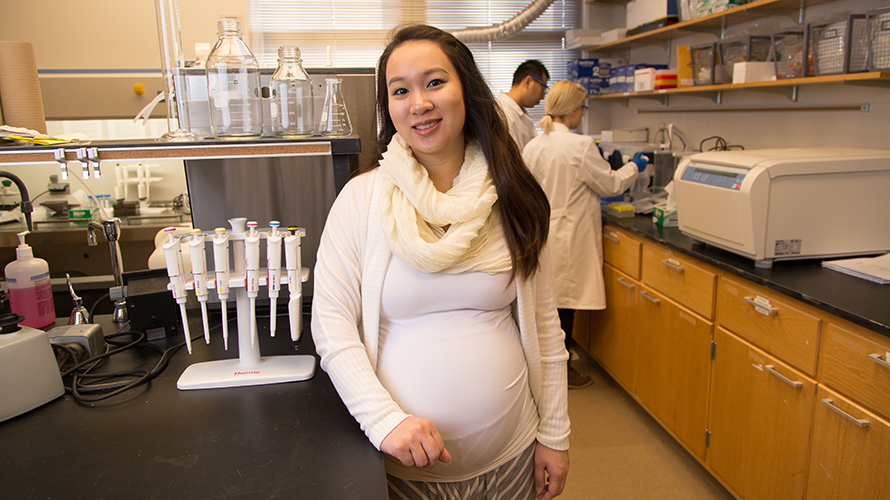 Perceived support by a romantic partner can minimize the physical impact of stress.

That’s according to findings of a new study by Jenny Phan, an Iowa State University graduate student in human development and family studies.

“Social support from someone you trust, someone that you’re bonded with, can buffer the negative experience of stress, and also attenuate some of the negative health experiences or symptoms that you go through,” she said.

Phan studies the science of human interactions. This spring, she defended her master’s thesis on stress and social support in romantic couples. Her research looked at how one partner is a source of support when the other partner is stressed.

As part of Phan’s study, 63 couples came to the lab. Each partner was taken to a separate room, and then one person underwent a typical stress test, performing speaking and math tasks in front of three blank-faced judges.

The tests showed increasing levels of cortisol, a hormone associated with stress, but much less cortisol if the person perceived support from their partner in the other room.

“For people who may have a tendency to be anxious under stress and who may develop really strong physical symptoms to the anxiety under stress, having social support to buffer that stress response can be a health benefit,” Phan said. “This can happen in the moment, and it can happen over time when you know that your partner is there for you.”

Both an emotional and physical experience

Phan explained that social support, like stress, is both an emotional and physical experience. Oxytocin, a hormone associated with bonding and trust, was measured to show the physical changes caused by social support.

“In my laboratory, we use biomarkers because they are objective,” said Elizabeth “Birdie” Shirtcliff, an associate professor in human development and family studies and Phan’s major professor. “But what we really are doing is pointing to all the squishy feely stuff — like love and support or stress and anxiety — and we are saying ‘see? It is real. It matters. It changes your body. It changes your brain. It makes you human.’”

Participants showed rising levels of oxytocin during the laboratory session despite the stress.

“We like to think of oxytocin as the opposite of cortisol or love as the opposite of stress,” explains Shirtcliff, “but what this really means is that trusting a loved one is how we get through stress. Oxytocin is bringing that person closer, helping us bond at a moment that we really need them.”

Phan’s study specifically looked at heterosexual romantic couples between the ages of 18 to 30 who had been together for at least a year. But as a mother who’s expecting her fourth child, Phan said she’d expect similar results in other strongly affiliated relationships, such as between a parent and child.

“I dropped off my son at the daycare before my thesis defense, and he kept wanting to hug me and kiss me before I left and he normally doesn’t do that,” Phan said. “When I got to school, I thought about it and I thought that was social support. In other words, hugging behavior increases oxytocin and I had a lot of hugs from him. So if I were to measure my oxytocin level, I would imagine it being pretty high.”

Research by Jenny Phan, a graduate student in human development and family studies, shows that perceived social support by a romantic partner can minimize the physical impact of stress.

“Social support from someone you trust, someone that you’re bonded with, can buffer the negative experience of stress, and also attenuate some of the negative health experiences or symptoms that you go through.”