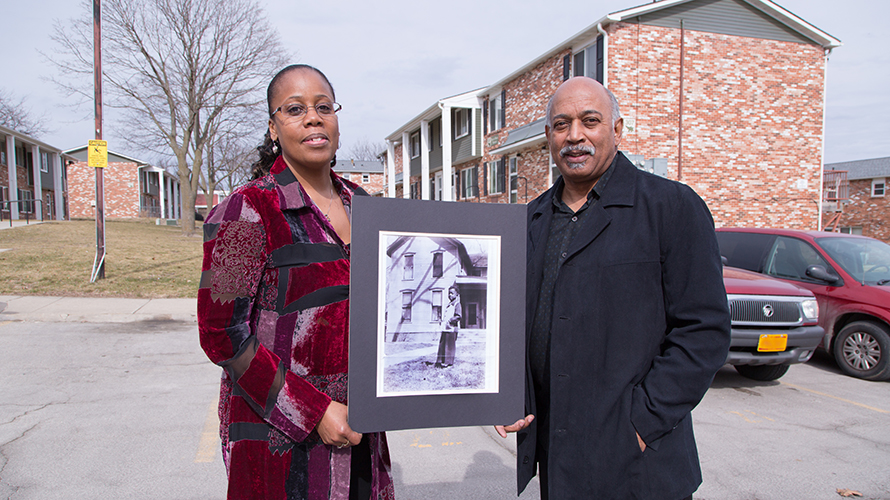 Madison DeShay is looking to the past to inform the future.

As the daughter and granddaughter of civil rights activists, black history has always intrigued her. She decided after her grandmother Aldeen Davis of Muscatine died that she couldn’t let any more history slip away.

DeShay, a graduate student in the Iowa State University School of Education, will this summer release a 90-minute documentary that’s been two decades in the making. “The Center Street Story: An Urban Renewal Retrospective” is the unique story of a thriving African-American business and residential district in Des Moines during the first half of the 20th century. The district has since been displaced.

“It’s a way to learn not only about urban renewal, but it’s also a way to learn about the history and experiences of African-Americans in Iowa,” she said. “It’s really to express a tragedy, because I believe that it was. It’s a tool to teach about this history and what happens when you displace entire communities. This story has too long been overshadowed by the larger national story of urban renewal.”

DeShay’s documentary, and a museum exhibit which preceded it, takes Iowa back to a time when Center Street was packed with activity — from dry cleaners to restaurants and pharmacies, hotels, and nightclubs. Big names came to perform there from all over the country.

But then came urban renewal in the 1960s. The area that was once the hub of the African-American community disappeared in the 1970s and was largely replaced by development of a hospital and what is now known as the Oakridge Neighborhood.

“At the bottom of the hill, the historic African-American business district was wiped out and the Center Street community was displaced,” DeShay said.

The documentary is narrated by Simon Estes, Iowa State’s F. Wendell Miller Distinguished Artist in Residence, and historian Richard Duncan, who grew up on Center Street. It tells the story of Center Street using the voices of the community, then describes why the thriving district is no longer there.

As a human scientist, DeShay develops strategies to improve the quality of life of urban centers. She uses her background in sociology and community and regional planning, and her experience working with the community as a program coordinator for ISU Extension and Outreach in Perry.

She hopes her documentary will be an educational resource. Major contributors to her project include ISU Extension and Outreach, the Office of the Vice President for Student Affairs, Humanities Iowa, Prairie Meadows, and the State Historical Society of Iowa.

She’s back at Iowa State to take the next step. DeShay is currently working with School of Education assistant professors Katy Swalwell and Michael Bowman to apply some of her research — and teach the next generation about how urban renewal has shaped the educational system between the 1950s and 1970s.

“I’m using history to learn from it,” DeShay said. “What went wrong, but also what went right? Were there some things that we can learn from that are worth repeating? I’m looking at the past to inform the future of our urban communities.”

School of Education graduate student Madison DeShay will this summer release a documentary about Center Street, a thriving African-American business and residential district in Des Moines that has since been displaced.

“It’s a way to learn not only about urban renewal, but it’s also a way to learn about the history and experiences of African-Americans in Iowa. It’s really to express a tragedy, because I believe that it was. It’s a tool to teach about this history and what happens when you displace entire communities.”