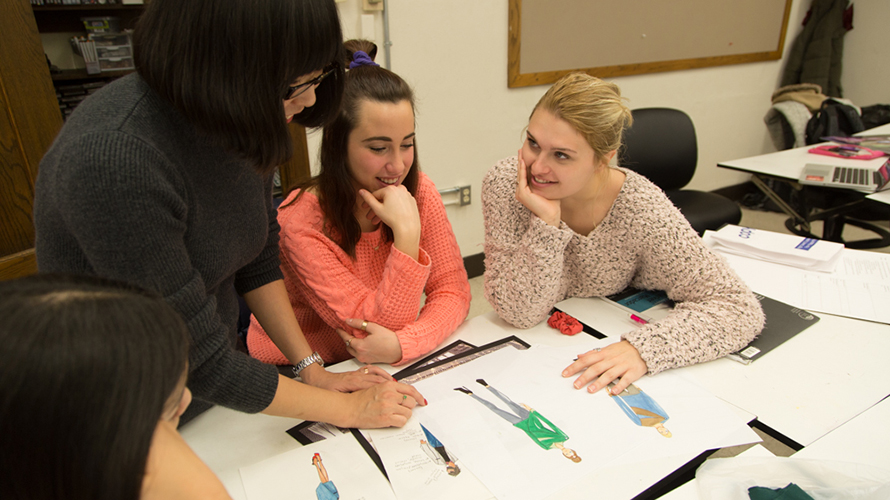 Cyclones and Hawkeyes are working together in a unique new partnership.

Iowa State University apparel, merchandising, and design students are partnering with the University of Iowa to design new uniforms for student ushers at Hancher Auditorium, the Iowa City events venue that will reopen in a new building next year after being destroyed seven years ago by flooding.

Students in Ling Zhang’s AMD 278 Fashion Illustration course are taking part in a design competition to create a new look for the 150 student ushers, who will debut their new uniforms at the kickoff of Hancher Auditorium’s 2016-2017 season.

Zhang, a doctoral student in apparel, merchandising, and design, said this is an exciting opportunity for the 18 undergraduates participating in the contest. For many, it is the first time designing for a client.

“Most of my students are sophomores and juniors and they haven’t had any internships yet,” Zhang said. “In class, I give them the assignments and inspiration. But this collaboration is for a real client. If someone’s design is picked, they will actually make it and people could wear it for eight to 10 years.”

The contest counts for class extra credit and the winning designer will receive $500.

Students partnering across the state

The partnership between Iowa State and Hancher Auditorium formed early this fall when the auditorium’s executive team approached Iowa State’s Department of Apparel, Events, and Hospitality Management for help.

“The key to a successful project is choosing the right partners,” said Chuck Swanson, executive director of Hancher Auditorium. “Partners who are passionate. Partners who want to make great things happen. We’re picky. We want to work with the best. We really want people who are going to be true partners like Ling and the design students.”

Connie Tipsword, Hancher Auditorium’s director of patron services, said auditorium leaders wanted students to design for other students. Without an apparel program at their own institution, they reached out to Iowa State’s award-winning apparel, merchandising, and design faculty and students.

“We want something fun and hip. Trendy –– but stands up over time,” she said. “Who knows better about what students want to wear than other students?”

Student ushers will be part of the selection committee to pick the winning design for their new uniforms.

“They will wear it, so Hancher thought the students would be the best judges,” Zhang said. “Their purpose is to involve all students.”

Zhang said research is the first skill students need to create good designs. They must consider the client’s background, utilitarian and aesthetic needs, and how to get the information. Zhang also instructed her students to research the auditorium itself, which is currently under construction and set to re-open in Sept. 2016.

“The garments have to fit in this building,” she said.

The new 1,800-seat space called for an update to the ushers’ look. The modern design sticks to a neutral template –– the idea is the people inside, including the ushers, will provide the color.

This real-world experience required the class to show advanced drawing skills in technical sketches. Everything must be shown, from stitching on the collar to the size of the buttons. No detail is too small. The garment manufacturers rely on technical sketches to create the garment from scratch.

Students also learned the basics of sticking to design budgets. Budgets determine how many details can be included in the design. They can mean the difference between adding or removing a pocket.

“As designers, they need to think about everything,” Zhang said.

Once in a lifetime opportunity

Cassidy Glynn, a junior in apparel, merchandising, and design, said she is excited and honored to have the opportunity.

“In the apparel classes I’m in now, it’s very open-ended with what we design,” she said. “For this project, we’re designing for a target market of people. It’s pushed everyone out of their comfort zones, but in a good way.”

Ellen McCauley, a junior in apparel, merchandising, and design, said designing for a real client is an experience they normally wouldn’t have.

“Making uniforms that are really unique, that will stay in style for 10 years but not be drab and boring –– that’s really challenging,” she said.

Mhairi Galloway, a junior in apparel, merchandising, and design who’s also an exchange student from Scotland, appreciates the opportunity for a different reason.

“It’s crazy,” she said. “If I won, it’s like designing something that could be in America forever even after I’m no longer here.”

Hancher Auditorium is the major performing arts venue in Iowa City, located on the campus of the University of Iowa. It stages 30 shows a year ranging from world-famous musicians such as Yo-Yo Ma and Wynton Marsalis, to Broadway plays and the world-renowned Joffrey Ballet.

A flood in 2008 destroyed the original auditorium, and it was demolished in 2013. During construction of a new building, Hancher has held its performances in churches, outdoors, and a renovated movie theater. The leaner operations required a fraction of the student staff the new building will require.

“We’re building up a student labor force,” Swanson said. “The winning uniform designs will be part of our staff recruitment.”

Swanson and Tipsword visited Zhang’s class on Nov. 16 to answer questions and express their design needs. Students later presented their first sketches during one-on-one critiques with Zhang. They have until Dec. 9 to submit final designs of male and female uniforms.

The decision is now in the hands of Hancher’s student ushers. The winning design will be selected in early 2016.

Iowa State University apparel, merchandising, and design students are partnering with the University of Iowa to design new uniforms for student ushers at Hancher Auditorium, the Iowa City events venue that will reopen in a new building next year after being destroyed seven years ago by flooding.

“In class, I give them the assignments and inspiration. But this collaboration is for a real client. If someone’s design is picked, they will actually make it and people could wear it for eight to 10 years.”

“We want something fun and hip. Trendy –– but stands up over time. Who knows better about what students want to wear than other students?”