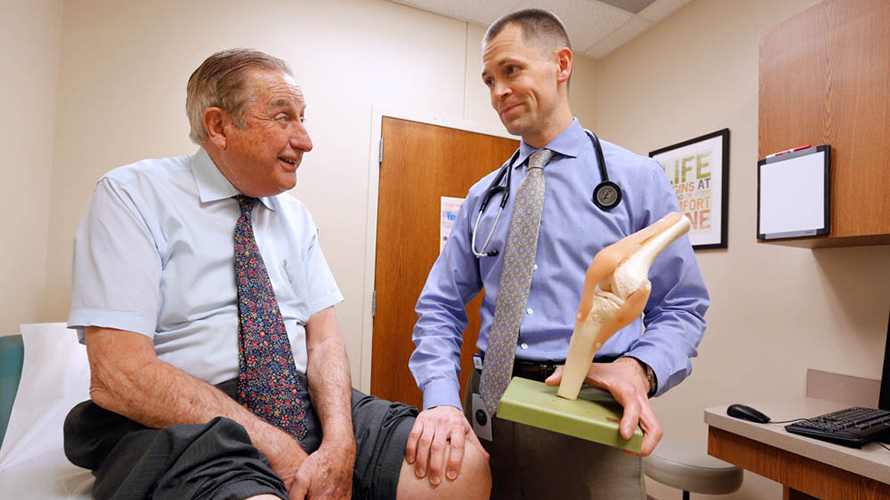 Dr. Shawn Spooner has traveled the world and touched thousands of people’s lives.

His work as a doctor in the U.S. Navy for nine years took him from California to South Korea, Chicago, and Afghanistan. He delivered more than 200 babies while in residency. He was the surrogate support system for new moms whose husbands were deployed to another country.

For two years, Spooner was the only doctor in the small, isolated Naval base in Chinhae, South Korea, serving the medical needs of 500 sailors, their families, and the nearby U.S. Pacific Fleet by himself.

In Chicago, he ensured that 30,000 Naval recruits annually met their medical requirements. And in Afghanistan, he operated a Concussion Restoration Care Center, treating and studying combat-related concussions and related injuries.

“As a family physician, you deliver and care for newborn babies, support and be with patients near the end of their lives, and everything in between,” he said. “I just want to take care of people and make each of them feel important.”

Getting an edge on medical school

He credits much of his success to his training in kinesiology at Iowa State University, which he said gave him an edge in medical school.

“Many of my medical school classmates had biology degrees and chemistry degrees. They had little that they could really apply in the trenches to clinical medicine,” Spooner said. “I could apply everything that I had already learned, and I still do. It’s all applicable, all very appropriate in clinical medicine.”

Spooner graduated from Iowa State in 2001 with a bachelor’s degree in exercise and sport science. As an undergraduate, he was learning about how exercise and wellness affects mental health, physical health, and longevity.

He fondly recalls faculty such as kinesiology professor Marian Kohut giving him opportunities to help in the labs, to get published — to get practical experience while still in school.

Being efficient but thorough

Spooner’s original goal as an undergraduate was to be a physical therapist.

“I recall Shawn having a keen interest in health care and being very bright in questions he would ask as a volunteer,” Nespor said. “He spent quite a few hours in our volunteer program and having done this, I knew he was committed to taking advantage of every opportunity that he had.”

Spooner believes in being efficient but thorough. He said he’s always been interested in the human machine — in not just getting patients out the door but finding out what’s wrong, helping them develop good health habits, and helping to prevent future injuries.

“That’s what I really enjoy doing,” he said. “I see people when they’re frustrated, when they’re injured or they’re sick. I give them the resources they need and treat them, to get them back to whatever their goal may be. I like to keep people in the game.”

Spooner sees many patients with challenges to overcome. Some of them have financial hurdles. He takes the time to talk to them, and lets them know he cares.

“As a family physician, sometimes you spend 20 to 30 minutes with them,” he said. “Whatever it takes. I try not to be in a rush. I want to give them the time they deserve and do what’s right.”

Shawn Spooner, an Urbandale doctor and veteran of the U.S. Navy, credits much of his success to his training in kinesiology at Iowa State University.

“Many of my medical school classmates had biology degrees and chemistry degrees. They had little that they could really apply in the trenches to clinical medicine. I could apply everything that I had already learned, and I still do.”