Iowa State boasts the largest collection of public art of any campus in the nation. More than six hundred works of art by scores of notable artists enrich the campus, yet no artist has made a mark on Iowa State quite like Christian Petersen.

Iowa State’s first artist-in-residence, Petersen taught in the applied art department, which then belonged to the school of home economics. He sculpted several of the university’s most beloved sculptures. His Fountain of the Four Seasons, located to the north of the Memorial Union, depicts four Osage women in the “four seasons” of planting corn, tending the crop, harvesting the bounty, and feeding the family. The Gentle Doctor, now renowned internationally as a symbol of veterinary medicine, depicts a veterinarian tenderly caring for an ill puppy, while the mother dog looks on with a throat-catching expression of attentive concern.

Petersen’s greatest strength as an artist lay in his ability to capture his subjects in moments of time that are utterly their own, as though his subjects exist wholly independent of their surroundings. Nowhere is this talent more obvious than in the Ring of Life. 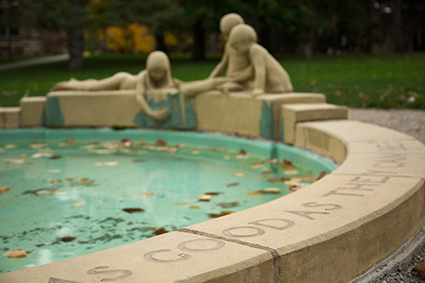 In this beloved life-sized sculpture, three children rest on a platform above a circular pool. A girl leans over the edge, her delicate hands gently cradling a water lily. Beside her, two boys sit, curiously observing a turtle. The children are completely absorbed in their moment, deeply instilled with a sense of timelessness. Inscribed around the circular pool are these lines from the poem “The Hired Man’s Faith in Children” by James Whitcomb Riley: “I believe all children’s good / If they are only understood / even bad ones seems to be / s’jest as good as they can be.”

When seen from above, the sculpture looks a little like a ring in which children take the place of gemstones. Petersen considered children to be far more precious than diamonds.

The original terra cotta sculpture was moved to its place of honor in the vestibule of MacKay Hall to protect it from breakage and the elements. A full-scale replica, cast in reinforced concrete, greets visitors on the south lawn of MacKay Hall.

MacKay Hall’s vestibule was restored to its 1926 roots during the 2014 renovation. The vestibule looks out toward central campus, reminding visitors of the long-standing importance of the building and the endurance of its programs. 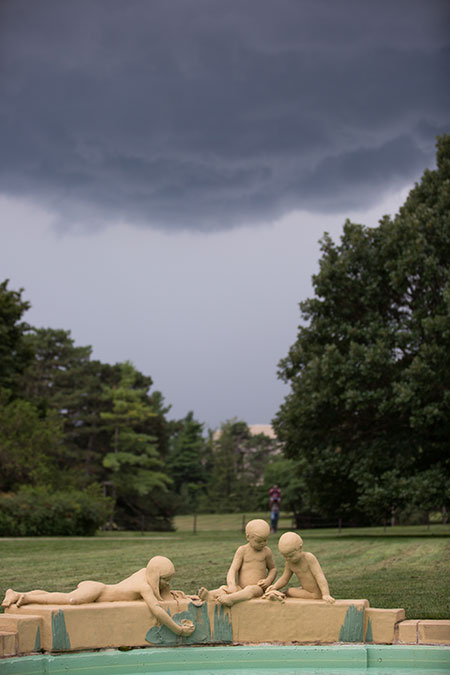