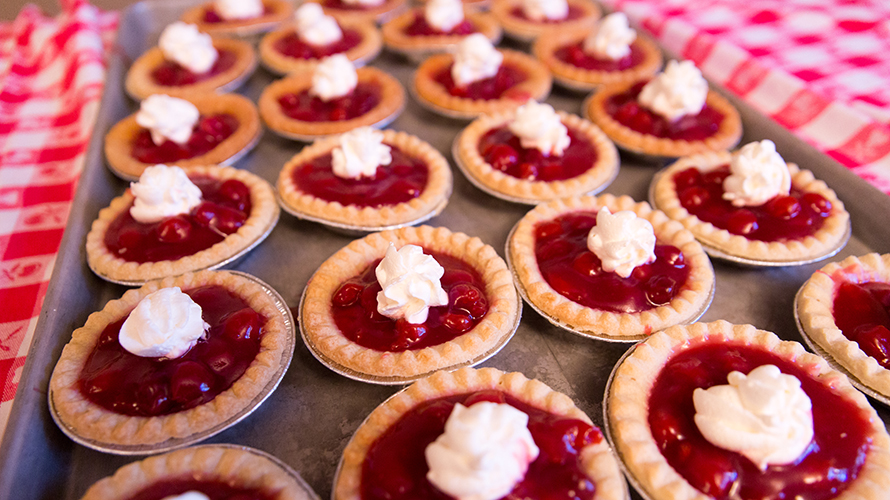 The most long-lived and beloved traditions have a way of beginning inauspiciously. The annual spring sale of cherry pies at Iowa State, a tradition now more than eight decades old, is no exception. A photo that appears on page 159 of A Century of Home Economics at Iowa State University shows a glimpse of the preparations for one of the very first cherry pie sales. In the photo, which is dated 1922, fifteen young home economics students gather in a MacKay Hall food lab, their crisp white aprons aglow with sunlight from a window just out of the frame. Little cherry pies, each on its own small dish, fill every available inch on the countertops before them.

In 1920, food preparation instructor N. Beth Bailey suggested baking and selling small pies to raise money for the Home Economics club. It was February — President George Washington’s birth month — and since George Washington was known for cutting down a cherry tree, the students chose cherry filling in honor of the president’s birthday. The first cherry pie sale required eighty pounds of flour, fifty pounds of shortening, thirty gallons of cherries, sixty pounds of sugar, fifteen pounds of cornstarch, and 166 bricks of ice cream. The sale of 2,000 pies netted about $500 for Home Economics club activities, including the Ellen H. Richards scholarship fund, Iowa Homemaker magazine, and the Constantinople Fund, a gift to a girls’ school in the Turkish city, which had not yet been renamed Istanbul. 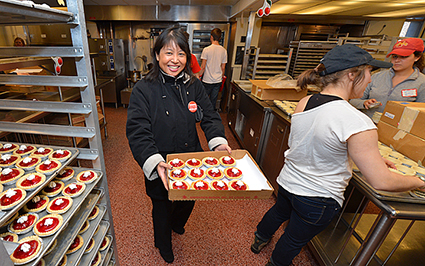 The cherry pie sale was so successful that it took place again the next year — and every year after that for more than eight decades.

The details of the annual pie sale have changed over the years. In 1922, the pie sale began to be held in April, and the number of pies sold has skyrocketed from 2,000 in the first year of the sale to over 14,500 sold in 2013. The pies themselves have changed a little, too. First made as a nine inch pie, the desserts were switched to a tart form in the 1940s. Students hand-pressed the tarts until the 1960s, when large quantities could be made more easily using a dough sheeter. The pies were topped with ice cream until World War II, when food rationing demanded the use of whipped cream instead. The cherry pies have used whipped cream ever since.