In August of 2014, construction crews completed a $3.2 million renovation of MacKay Hall, a building that has seen nearly one hundred years of Iowa State history. The renovation posed a monumental challenge: how to update the building to meet the needs of today’s students while respecting, preserving, and showcasing MacKay Hall’s fascinating history and its significant contributions to Iowa State’s prestige: MacKay Hall has long been home to important programs, notable alumni, beloved works of art, and some of our most treasured traditions.

It’s natural for students to want their favorite places on campus to remain exactly as those places appear in fond memories, yet a closer look at the history of MacKay Hall reveals a building that has evolved several times to meet the needs of its students. 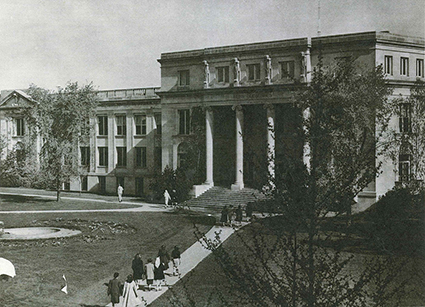 Architects Proudfood and Bird completed the first version of MacKay Hall in 1911, and that original version looked quite different than MacKay Hall does today. Faced in red bricks and consisting of what is now the west wing of the building, MacKay Hall was located near Margaret Hall, the women’s dormitory. MacKay Hall was first known as the Domestic Technology building, and later the Home Economics building.

At a time when most universities were open to men only, studying home economics was a way for women to attend college. Co-educational from the start, Iowa State was one of the first universities in the nation to teach home economics, the science and art of how to run an effective, efficient, and economical household.

Home Economics students at Iowa State discovered how to prepare food for large and small groups, how to obtain the best ingredients at the best prices, and how nutrition affects human health and development. They learned about textiles and clothing materials and how to make and repair clothing, linens, and other goods. They studied human health, child development, and family relationships. The home economics program at Iowa State also trained instructors of domestic science for other colleges and public schools. In addition to learning home economics skills, these future educators learned to teach others how to run households and farmsteads. MacKay Hall’s floor plan contained classrooms, lecture halls, laboratories, and practice kitchens, all designed for state-of-the-art hands-on learning of domestic science. 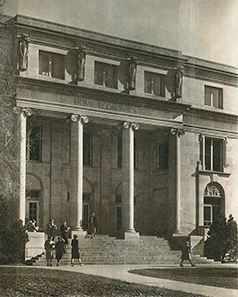 It’s no surprise that the Home Economics program at Iowa State witnessed a phenomenal response from the community: enrollment grew so quickly that the Home Economics program was soon in need of a larger building. In 1926, MacKay Hall gained a new wing and contractors completed the majestic Catherine J. MacKay Auditorium, named for the longtime dean of Home Economics. The entire building was named for Dean MacKay in 1957. In addition to these major construction projects in 1924 and 1926, and the latest renovation in 2014, MacKay Hall has seen several other remodels over the years.